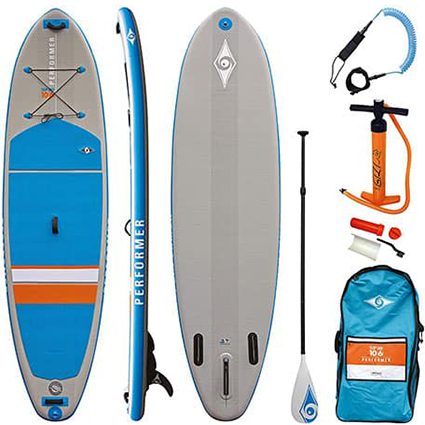 When you think of iSUP manufacturer, you may not think of the same people who made the pen that’s probably in your pocket right now. But much like a lot of large international companies, we tend not to realize that they be involved in other industries other than what we know them for. Bic, for instance, isn’t a pen company — it’s one of the largest plastic manufacturers in the world that just happens to be known for their pens.
So, it makes sense that a company known for plastics would be a good fit to make iSUPs as well since these are highly engineered plastic boards. But how do these really pan out? Is Bic simply using their expertise to excel in another field or should they stick to office supplies? 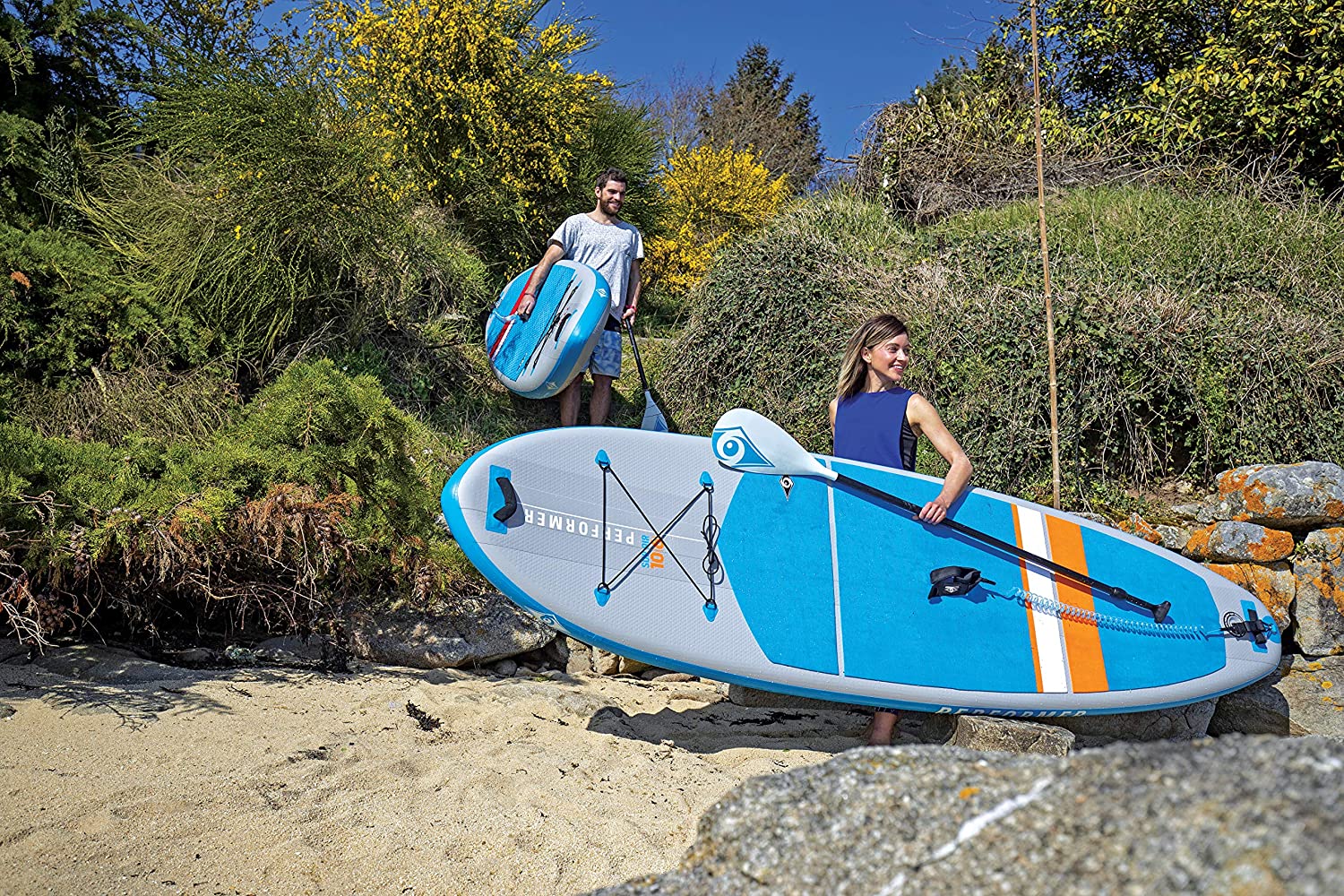 As an all-around board, the Performer Air doesn’t break any records but still performs well. The standout quality of this SUP is its stability due to it being a little bit wider than you would expect with a board of this length, 33” instead of just 32”. Also, we find that’s it’s great also quite maneuverable due to the shape of the board and the thruster fin setup.
In regard to speed, it isn’t all that impressive but good enough. This board is tiny bit on the heavy side for its size and that probably plays a role in that. This iSUP isn’t great when it comes to choppy water though it actually handles decently if you catch a wave or 2 since the board not only has a shorter profile, but it’s also extra thin to accommodate quick movements.

We’re going to be completely honest here: this is a bare bones board with just a couple exceptions. There’s nothing wrong with that and if you’re really just focused on the paddleboarding itself, it should be a non-issue.
The pad on this is actually more comfortable than we would have imagined. This embossed EVA foam is designed to give a comfortable ride to the paddler while still giving them enough traction to not worry about falling off while doing any general paddling or even surfing. Instead of having 1 solid pad, there are divisions within the pad that end up creating channels that help water move off the deck, making it as dry as possible.
A feature we were happy to see was the with the grab handles. Of course we expected to see the center handle for carrying the board on land, but having 2 additional handles at either end is always a good sign from a user’s standpoint because these are what help you move the iSUP in and out of the water. Generally speaking, we would expect to only see 1 but the second means that you have more versatility.

Much like the rest of Bic’s iSUPs, you have 2 choices when it comes to the color scheme: take it or leave it. It’s not an unattractive design, but the grey, blue and orange does leave quite a bit to be desired.
Toward the front of the deck we find the what for most iSUPs is a standard storage area of a bungee area connected by 4 D-rings. This allows you to store items like coolers or drybags both below the bungees or to be connected to the D-rings. Along with the 4 D-rings up front, there is also an additional D-ring on the back designed to be used with the included ankle leash. 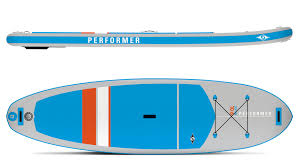 The board itself is rather flat and while the nose does come up a little, it’s not as much as we would see in other similar boards. This means that it’s better suited for flat water rather than choppy.
Underneath the board you’ll find a thruster fin setup. That means that in addition to the single 8” tracking fin, you also have 2 side fins that act to cut down the drag that center find would normally generate plus create a little bit of speed on their own. An added benefit is that it give more maneuverability to the board as well.

Bic uses their own unique construction process for their iSUPs called SUP AIR Constriction. This involves using a single layer of PVC material that is reinforced both internally and externally. The internal side of the reinforcement involved high density drop stitch construction inside while using stringer on the outside. Essentially, this involves a belt being wrapped around the board from nose to tail to make the board feel as solid as possible. In addition, they use double layer PVC on the rails since that is the most vulnerable part of the board.

Out of the box you can expect an oversized backpack, dual action air pump, repair kit, leash, fiberglass paddle, 8” Dolphin fin and 2 side fins. We like the backpack since it has extra room for more than just the board and iSUP gear, so you can bring your own personal gear without having a separate bag. 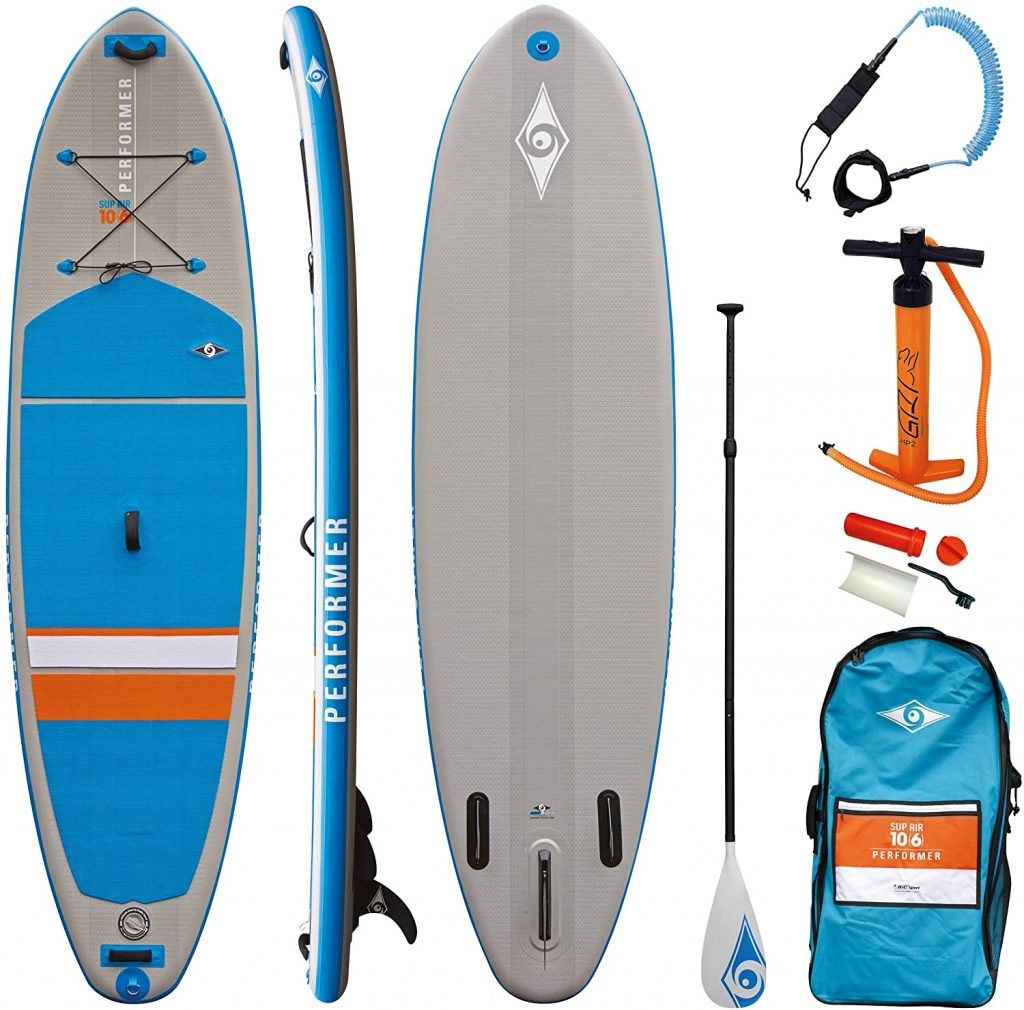 However, the air pump and the paddle are bit underwhelming. One of the most laborious parts of going on the water is inflating the board and the last thing you want is a pump that isn’t going to inflate well. While not a bad air pump, we wouldn’t show if off to our friends, either. You may want to consider purchasing another model separately or even an electric pump, for that matter.

In a word, the Bic Performer Air is…fine. Pretty much everything about it is fine. We don’t have too many gripes about this iSUP but we aren’t terribly impressed, either. For instance, we salute Bic for using a fairly novel form of construction to keep the weight down, but there are boards that use a similar construction that are significantly lighter. For the price, they offer a good exactly what we would expect, but there are others in this price range that offer a few nicer touches, such as better accessories or board styles.
One of the great things we can see in this board is that it’s common and easy to come by in local brick and morter stores compared to other brands out there. So, if you find yourself in a surf shop and need to pick out and iSUP on the fly, the Bic Performer Air could work out for you in a pinch. 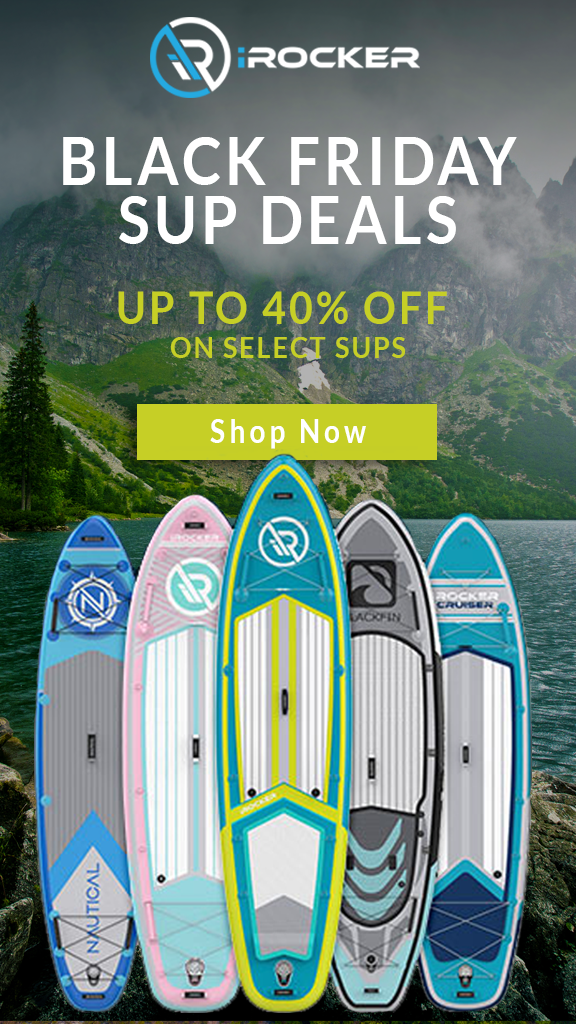 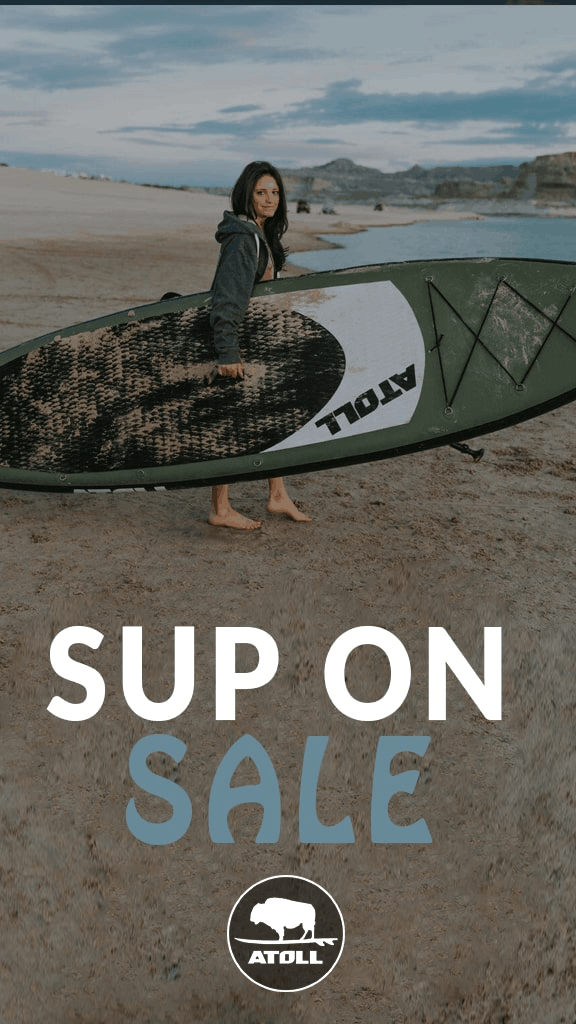