Although it doesn’t seem all that interesting to some, selecting the amount and type of fins for your SUP can be an exciting way to make the most of your paddleboarding experience. Here we’ll discuss what the various options mean for you and your board.

If you’ve looking over paddleboard specs, perhaps you’ve noticed them mention a specific number of fins. Each option has 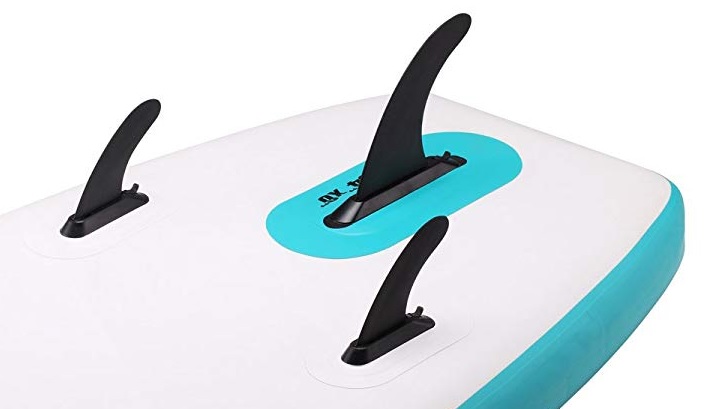 certain benefits with their own drawbacks.

Single Fin Setup: This is the most basic setup and has the benefit of being the simplest and cheapest. Also, it gives you the most stability and tracking. The biggest drawback is that it creates the most drag and will slow down your performance somewhat.

3 Fin Setup: While giving you stability, this setup does so less than a single blade. The reason you would want to consider this would for performance. The center fin works the same as the single fin but the side fins work together to help you create speed, which is why they’re called thrusters.

5 Fin Setup: By far the most rare setup, this is usually seen in extremely large boards. In essence, they work the same as a 3 fin setup in smaller SUPs.

In addition to the number of fins, some brands use a universal fin box that will allow you to swap out a fin, usually the center fin in a 3 setup or the only fin in a single fin setup. The reason for swapping out the fin vary. For instance, if you’re racing, you may want to get a longer, more rigid fin. If you’re going to be going through an area with a lot of kelp, you may want to look for a serrated fin that will cut through all of that.

One thing to note, however: do your research before swapping out a fin. You may find that the included fin with your SUP is more than enough or you may be overwhelmed with the amount of options. Often the differences between fins are subtle, so just make sure it’s worth the investment before you go out and get a new accessory for your SUP.