Sometimes you just want to leave it all behind. With the ISLE 12’6” Discovery, you can little do just that! Of all the iSUPs in the ISLE lineup, this is by far the fastest. From the long, thin profile and pointed nose, everything about this boards scream speed.

[ez-toc]We know that when it comes to performance, hard boards generally beat out an inflatable in most categories, but that way of thinking is going out the window. Especially since ISLE is one of the grand daddies of the iSUP industry as a whole, it makes sence that it leads the way in making a board that pushes the limits and ideas that most people have about iSUPs.
Officially, the Discovery is classified as a touring board, though it goes about it in a unique way. Most touring boards get that designation due to comfort and storage space. This guy, while comfortable and having a good deal of storage space, is able to cover a lot of ground fast. So, if you’re looking to get both yourself and your stuff somewhere fast, let’s find out if the ISLE 12’6” Discovery iSUP might be worth the purchase.

The features that usually define the stability on an iSUP are a bit of a draw here. On the one hand, longer boards are generally more stable and at 12’6”, you could say this is a long board…well, because it’s long. On the other hand, 31” is on the thin side, especially for a touring board, although we’ve seen touring boards at 30” as well. Honestly, those two factors cancel each other out and we end up with a board that is stable but not extra stable, which is a quality we look for in a touring board.

For a SUP of this length, it is remarkable maneuverable. You obviously can’t compare it with a board a few feet shorter, but having a 3-fin system helps to give you the ability to turn even though you can tell this board was meant to move forward.

Speed is the main reason to step on the deck of this iSUP. It’s rare that you’d find an inflatable with this amount of umph. In fact, racing is usually reserved for hardboards, this would give most of them a run for their money on calmer waters. Once things start getting choppy, things start to slow down but you still move surprising fast for an inflatable. If you want to take advantage of waves that might come your way, though, you may want to opt for a smaller board since it might be tough to catch a wave with a board so long and thin. However, the Discovery can still hold its own with some light or even moderate waves.

Some of what we see with the board design is standard for ISLE boards with a few surprises. For instance, the center carrying handle is rounded and very comfortable for carrying across the beach to the water. There are both front and back handles to easily moving the SUP in and out of the water. What’s interesting to see here is that the front is so thin that the handle had to be turned 90 degrees to accommodate. A unique feature on this board is the addition of 2 side handles which can be used for everything from a leash, additional gear, attachment points at dock for moving the board through shallower rivers when loaded with gear. We hate to get picky, but it really would have been nice to have handle on the tail since that allows you to drag the SUP on the beach without worrying about damaging the back fins.

As you would expect with a SUP made for speed, the Discovery has a 3-fin system. While it may seem counterinitiative to have more fins for the speed, the fact is that this system helps to create more speed and reduce drag in the water when compared to a single fin.

Even though this board is long, it actually isn’t that difficult to inflate and deflate since it’s so thin. You can expect to get the board out of the included backpack and into the water in less than 10 minutes. But as with any large board, it’s never a bad idea to look into an electric air pump to get things moving faster, especially when you want to use the iSUP at a higher PSI. 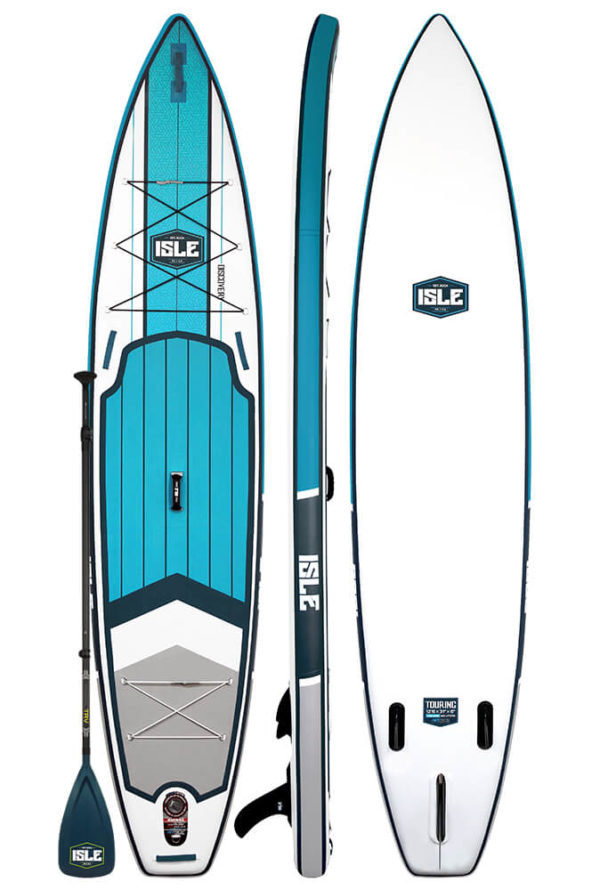 When you look at the board all around, you get the idea that the design was inspired by a barracuda. The overall shape looks like one, but also the blue top with the white belly which is fitting for a SUP built for speed.

Even though ISLE markets this as a touring board, the traction pad is a dead giveaway that it really isn’t. If you look at the deck as a whole, there isn’t a lot of space for lying or sitting, which is what you would expect in a touring board. While the Discovery uses the standard textured brushed EVA pad that ISLE has improved on recently, there isn’t much room to do more than stand or kneel, albeit comfortably.

The saving grace in naming this a touring board is with the storage space. At first glance, it seems like there isn’t much compared to some of the other boards in the ISLE lineup. But if you take another look, you can see that it’s the same amount as most of the other boards — the long profile just makes it seem smaller. You’re still treated to 10 D-rings (plus 1 on the back for the ankle leash or docking) that attack to make 2 bungee storage areas — 1 in the front and 1 in the back.

ISLE is known for putting the most strength into as little material as possible. That’s why the Discovery is constructed of a dual-layer military grade PVC material that’s manufactured with the proprietary Airtech Fusion Lite process. In a nutshell, it involves a seal and bonding layer coming down with the with each stich in the drop-stitch process. This creates and extra strong board and seam that withstand just about anything you may encounter in the water with the exception of sharp rocks or metal since all iSUPS are susceptible to those sorts of damages. In the end, you get a 12’6” SUP for just over 20 pounds!

Being so light is crucial for a SUP build for speed since the heavier the board, the more you have to push along. Plus, if you decide that you aren’t the kind of person that just drives right up to the water and gets in, having such little weight on your back gives you the option to travel further without getting to tired to actually start paddling.

To make sure your board doesn’t run away from you, there is an included 8’ coiled leash. This means that you don’t have a giant cord dangling off the board while you’re paddling

but can still go on the water confident that you’ll come back with your SUP no matter what. It also has a Velcro holder for your keys if you want to go out without other bags.

The repair kit is fairly standard stuff — a few patches for a leak and a wrench to tighten the inflation valve if need be. Our only issue is that it doesn’t include the glue for the patches, so that’s something you’ll need to be mindful of. That glue isn’t expensive or hard t find by any means, but it still would have been a nice touch to have the ability to make a complete repair with the included repair kit.

Of all the included items, we have the single chamber pump. It’s…ok. We mean, it’s good quality for what it is, but what it is isn’t all that powerful and you may find yourself getting a decent arm and shoulder workout inflating the board. In the future, we would love to see a dual chamber pump like we see in a few of their competitor’s packages.

If you’re so inclined, ISLE also has a few add-ons that we would recommend you look into. To make your life a lot easier, they have two options for electric air pump — one that plugs into your car’s cigarette lighter and one that runs on a chargeable battery. Also, you have a respectable 15L dry bag that you can put either in the bungee areas or attach to a D-ring. Lastly, they offer an inflatable belt pack life jacket. While not requires all the time, we do recommend using one in most water and the US Coast Guard requires a life vest of some sort when paddling outside of swimming areas.

One thing that makes purchasing from ISLE different from many other brands is that from day 1, they’ve had their focus on direct to customer sales. That’s why unlike some other brands out there, you woun’t be able to find their boards in your local sports or outdoor shop.

If you’re looking to add the ISLE Scout to your arsenal, there are two ways to do that online. You can either going through their own page[i] or through Amazon[ii]. As of now, is no difference in price between the two options, but ISLE give you the option to pay in installments through Affirm.

The Isle 12’6” Discovery is a strong nod to the company’s origen: 2 college buddies looking to sell surfboards directly to the customer. Actually, they were selling used surf boards, but you the idea. It’s sleek and moves well while still having what you would expect from a quality iSUP. 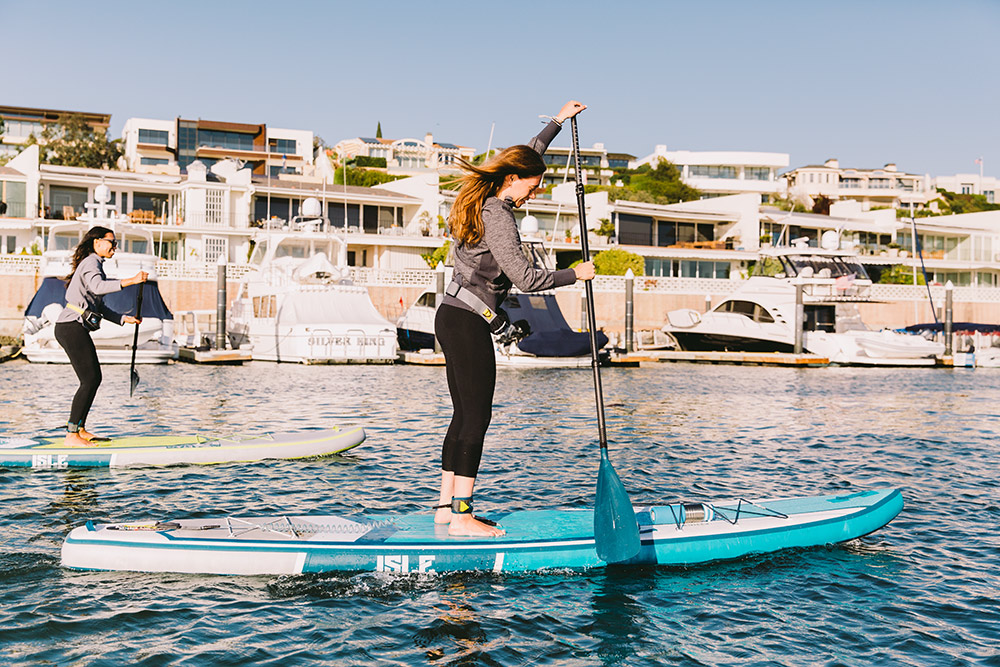 If we’ve said it once, we’ve said it a hundred times: this is not a touring SUP. It’s not going to be comfortable for extended hours or days like we would expect from a touring board. That being said, it is a fantastic performance board for more advances paddlers who want to move. While there are faster iSUPs, the ISLE 12’6” Discovery is certainly a strong competitor. For those looking for a board that will show off what years of iSUP practice can do, we would definitely recommend the Discovery.

CLICK HERE TO GET YOUR VERY OWN ISLE 12’6” DISCOVERY