Posted at 10:13h in Solstice Bali by [email protected]
0 Likes

On this site, we mention certain factors that you should look for when looking to a buy an iSUP. Our review here of the Solstice Bali iSUP is helpful, not just for the board itself, but what to look for if you’re looking at other budget boards. For instance, the thickness of this board is 4”. While more expensive boards come at 6” or 8”, the Bali is thick enough to get you around without any noticeable bending.  One thing that does stand out and needs to be mentioned is that unlike most other SUPs, this does not come with a paddle. So, this may play a role in the relatively low price.

But price aside, is the Solstice Bali actually worth the cost? 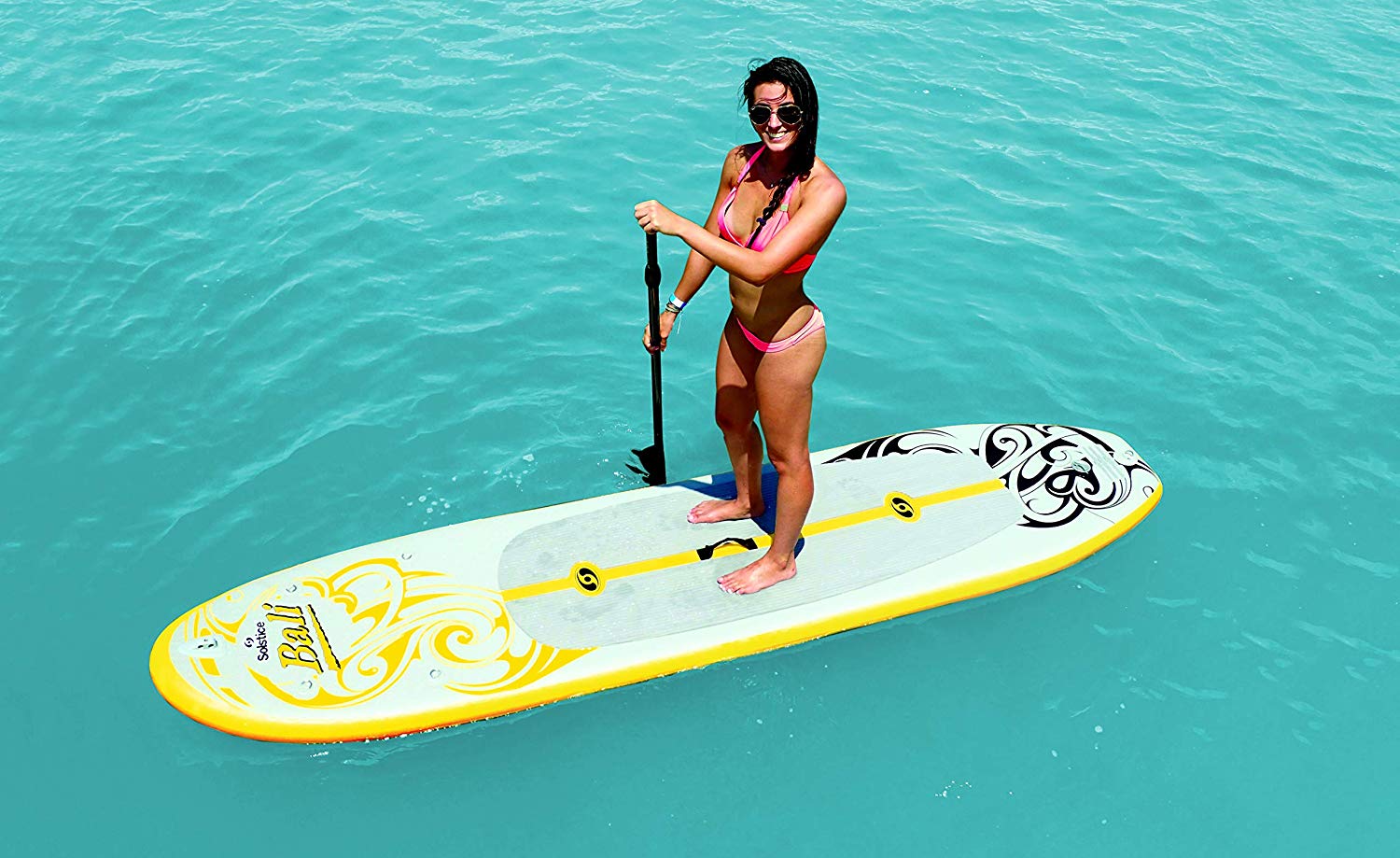 Solstice made a board that is perfectly standard. The ride is smooth and the board tracks well thanks to the single fin setup. Of course, the tradeoff is that the Bali isn’t all that fast and maneuvering can take more effort than with other boards. Thankfully since the board is a bit shorter than others on the market, this is offset a little.

In general, this is SUP is very stable given that there isn’t too much weight on the board. Unfortunately, since it’s so thin, the board starts to lose that stability even before the official weight limit is reached. Based on all this, it’s best used on calm water with little to no surf.

One of our favorite things about the Bali is that it doesn’t pretend to be anything that it isn’t. After all, it’s better to pleasantly surprise someone than disappoint. The deck pad is made out of a standard EVA padding that isn’t particularly comfortable but is surprisingly long. In fact, despite not being a large board, you can use a large portion of the deck.

The Bali only sports 1 center handle for carrying the board once it’s inflated. In a perfect world, we’d like to see at least 1 more (2 more, ideally), but we wouldn’t call it a dealer breaker, either. In reality, the purpose of these extra grab handled would be to provide a way to maneuver the boat in and out of the water on the beach.

One look at the board and a work that might come to mind is “unassuming.” Mostly grey with yellow highlights, it won’t get you noticed on the water but it isn’t unattractive, either. We would have liked to have seen the option for additional colors, but budget boards tend to not have that option since it’s cheaper to make all their boards the same.

A point of interest in this board is the lack of a bungee storage area. Towards the noise of the board there are 4 D-ring tiedowns which can be used for coolers, dry bags or other items, though not having any bungee cords does make this board stand out. Speaking of D-rings, there is a dedicated attachment point for a leash on the back of the board.

One of the reasons that the Bali can get away with such a thin board but still remain solid is in its construction. It’s made using a 1000 denier 3-ply PVC material that almost feels like a hardboard when inflated to higher than usual 15 PSI. Its dimensions are perfectly standard for this type of board measuring at 10’8” long and 32” wide. Besides this, here are its other features: 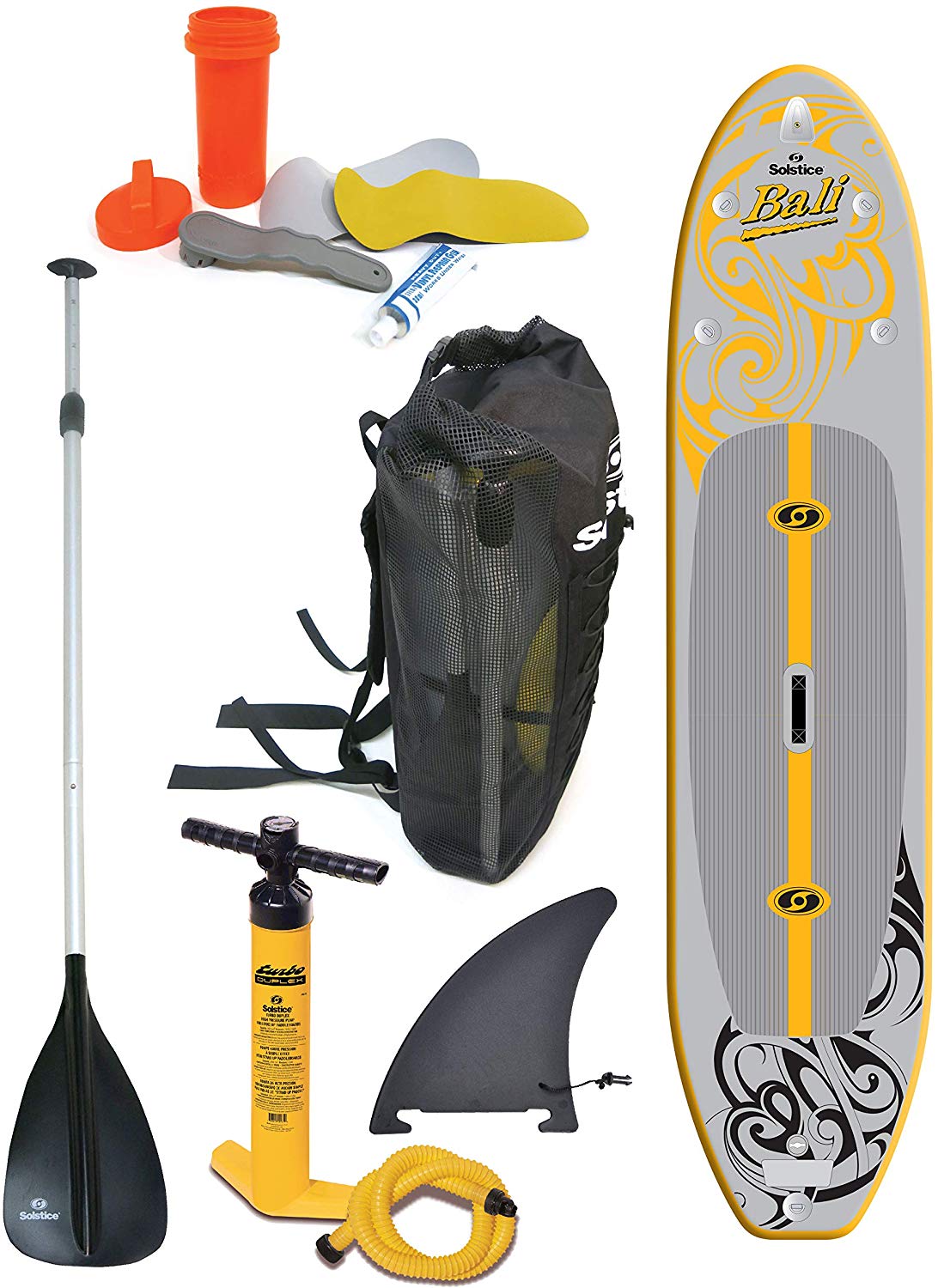 This is one of those “you get what you pay for” situations. The air pump that comes with the board is one the cheapest we’ve seen and feels like it might break after a few uses. The included backpack is sufficient for the board, though it would be nice to have a little extra room to bring along extra gear or even a snack.

The biggest disappointment with the accessories (and possibly the board as a whole) is that it doesn’t come with a paddle. They might have thought that since the board is relatively inexpensive, they could get away with selling the paddle separately. While the board is cheap, it isn’t that cheap.

It doesn’t see that you can purchase directly from the company as the only options we’re aware of to purchase this board is via distributors and Amazon. With that being said, most places where you can purchase this iSUP offer free shipping and if you go through Amazon, you can also add on insurance.

This board gets some attention for its low price. However, while this is by no means a bad board, you could still get other boards in this class for the same price or less. That being said, we can forgive a lot of things about this board, such as the 4” thickness, cheap accessories and even the lack of bungees, but not even including a cheap paddle is a bit much. For whatever reason, we tend to find a lack of paddle in iSUPs on the low and high end of the price spectrum.

All that aside, we can see the Solstice Bali working well for 2 groups of people: beginners and someone looking for a spare board. It’s a stable board with 3 layers of PVC, so it should be able to stand up to even the worst abuse of a new paddler. And while we wouldn’t want to use this as a primary board, it could work in a pinch for a backup — especially if you have other paddles to use.