There are other brands with their giant boards, though usually not quite as big as this. Among them all, the one thing they have in common that they are built purely for fun. You can put on a whole family plus a few neighbors and go out on the water without worrying about not having enough space or tipping over.

In the world of iSUPs, most board come in somewhere between 9 and 12 feet. Occasionally, you might get something up to 14 feet, but sometimes the stars all align and you end up and with absolute behemoth like the Team Inflatable that comes in 3 sizes with the largest being longer than 18 feet long. That’s a whole lot of board!

Before we go over the Team Inflatable, we need to let you know that like many other Starboard iSUPs, there are multiple versions of this model that differ greatly — both in size and shape. So, we will be referring to them separately whenever appropriate. Just for reference they are the Starship All Water (18’6”x60”), Tandem (16’x32”) and the Starship Family (15’x55”).

The Starship models are not performance-based SUPS by any means, since their size and weight mean that they are going to be slow and somewhat difficult to maneuver. However, where they shine is with their insane stability. This are long, thick and wide boards that are meant to take one a lot of weight. In fact, the larger of the 2 models can hold up to 2000 pounds on its deck! This major stability comes in handy if you encounter choppy waters and even a modest wave.

Being much thinner, the Tandem has an sharp profile that cuts in calm water and can fly given enough paddlers, which is sort of the point. In fact, it’s specially graded for racing. Turning can be a little bit of an issue but not as much as we had initially thought given that this is a board designed to move forward and have strong tracking. We would be cautious about taking this into rougher water, especially with a full crew, since it isn’t the most stable board. But then again, that’s par for the course with a racing SUP.

There’s a lot going on with these boards to take advantage of the space and capability they offer. For instance, the Tandem has a handle on the center, back and front of the deck for easier transport on land and in and out of the water easier. However, the Starship models have handles all along the side — up to 12 per board! This is because they are so much heavier and need a few extra hands to move but also to make getting back on the board after falling off easier. 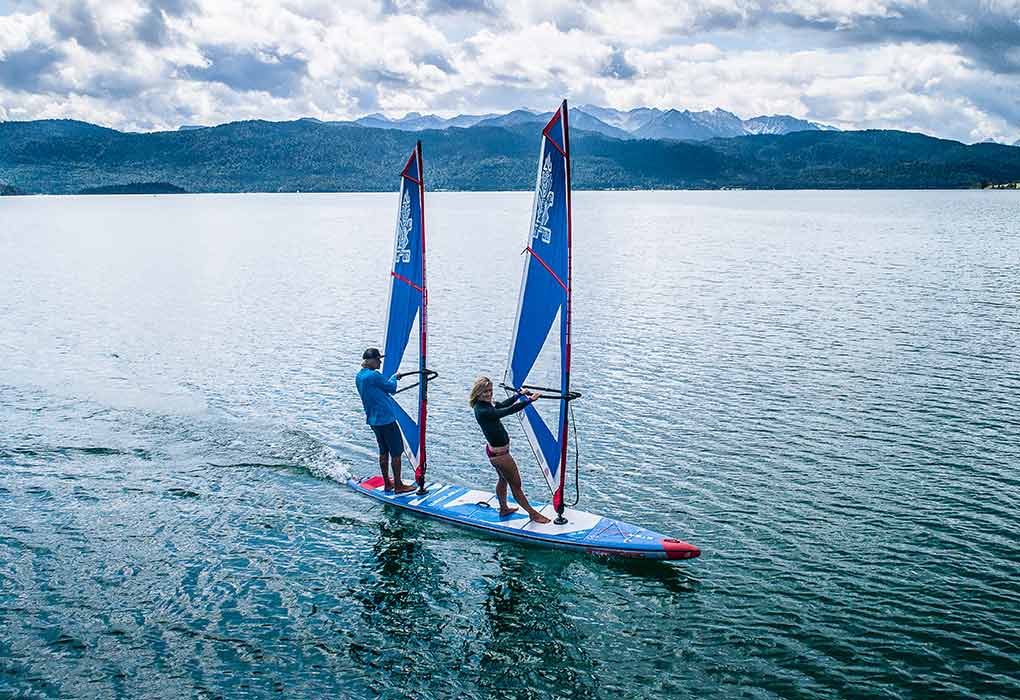 Something that all the boards have in common are EVA foam pads that cover about 90% of the deck. This is because these iSUPs are meant to hold a lot of people, both standing and sitting, so it makes sense to make sure that most of the deck is available. Also, these models all have windsurf inserts so that if you get tired of paddling want the winds to take you away, you can insert the optional sails into 2 attachments in the deck itself.

As far as colors go, you don’t have any choice as they all sport the standard blue and white with a splash of red that we expect to see from other standard Starboard decks. On the other hand, when we start talking about board shapes, that’s where there’s a huge difference. Speaking on the most superficial of levels, the Starship All Water is the most “standard” shape — with a balance of length to width — while the Tandem is very narrow and the Starship family is more rounded. These are tailored to suit the purpose and target audience of each board.

The Tandem has a thruster 3-fin setup that we would expect in a board of this type as it offers speed yet good tracking. Both the Starship models have a 5-fin setup due to their immense size that helps to make them as maneuverable as possible considering their extreme dimensions. 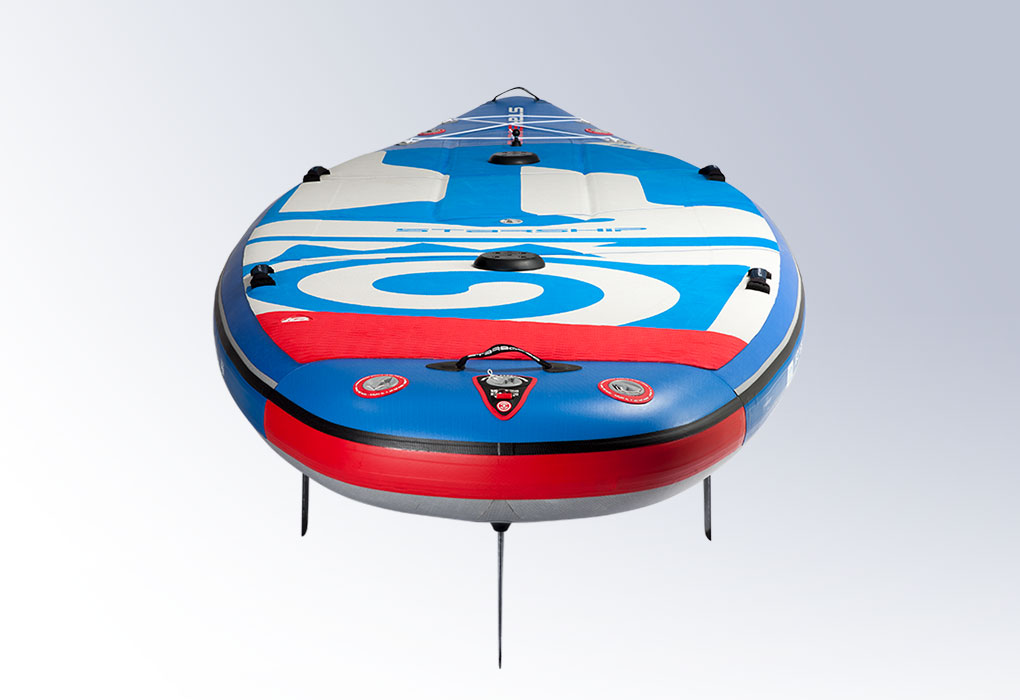 For whatever reason, the Starship models only have a single 4-point bungee storage area up front with their corresponding D-rings. Since these boards are mean to hold so many passengers at once, you generally wouldn’t expect to see a D-ring for an ankle leash, but we would have expected to see some more D-rings for storage and possibly more bungee space. The Tandem, however, has second storage space out back. Why the Tandem and not the Starships? Well, that’s a question for Starboard, we suppose.

While Starboard generally give a choice of 1 of 4 construction options, the entire Team Inflatable lineup only has one available — the Deluxe Double Chamber. Essentially, it contains 2 chamber inflation areas on the inside for the maximum stability that a board like this can offer. In addition, reinforced rails are put on that side that use a heat process on their seams versus the traditional glue in addition to drop stitching.

Because of the double chambers, you can expect a bit more time when it comes to inflating the board as there are 2 separate areas to inflate instead of the traditional single. However, the Starship models do have 2 inflation valves, which makes things a little easier, although we would still highly recommend an electric pump for an inflatable of this size.

Out of the box, you get a carrying case, removable center fin and tiki air pump. As a side note, the air pump is made from recycled fishing nets and the newest version is 10% more efficient than the previous model.

Note that these boards do not include a paddle.

These boards usually market themselves a novelties as they don’t generally serve a specific purpose like most other boards. The Starship All Water is the largest board we’ve reviewed up to this point and likely the largest on the market as of the writing of this review.

While we like to get on Starboard’s case for not including a paddle with their paddleboards considering that almost everyone else does and that these are pricey iSUPs, this issue is even more glaring here. For instance, other companies that offer large board even include 2 paddles since they know that multiple people will need to work their board. When you consider this board, remember to factor in at least 2 paddles — if not more — to the final price.

All that being said, if you have an active family or group that would benefit from all being on the water at the same time and your budget is on the higher level, the Starboard Team Inflatable line is one of the best options out there.