But what about if you want an iSUP are have a really tight budget but don’t want to buy just any cheapo piece of garbage on the market? After all, there are plenty poorly constructed iSUPs on the market that will get you on the water, though with some major drawbacks.

That’s seems to be where the Nautical comes in. New to the iRocker lineup this year, this budget model promises to get you the best budget model on the market. Does the Nautical live up to its promise or should it be pushed off to sea?

One of the last things we would expect to see in a budget board is that it performs just as well as most other mid-tier iSUPs, if not a little better. For example, at this price range we would expect a single center fin that tracks fine but slows down the board when we actually get a 3-fin setup that not only keeps the speed up, it’s also one of the reasons that board maneuvers so well. Also, it’s super lightweight so that each paddle stroke does more damage and you can get some decent momentum.

Even though it isn’t designed as such and this supposed to be the budget board, it’s probably one of the top surfing iSUPs that iRocker has right now. Between the stability and maneuverability of this board, you can actually hit some good-sized waves and come back to tell an amazing tale. 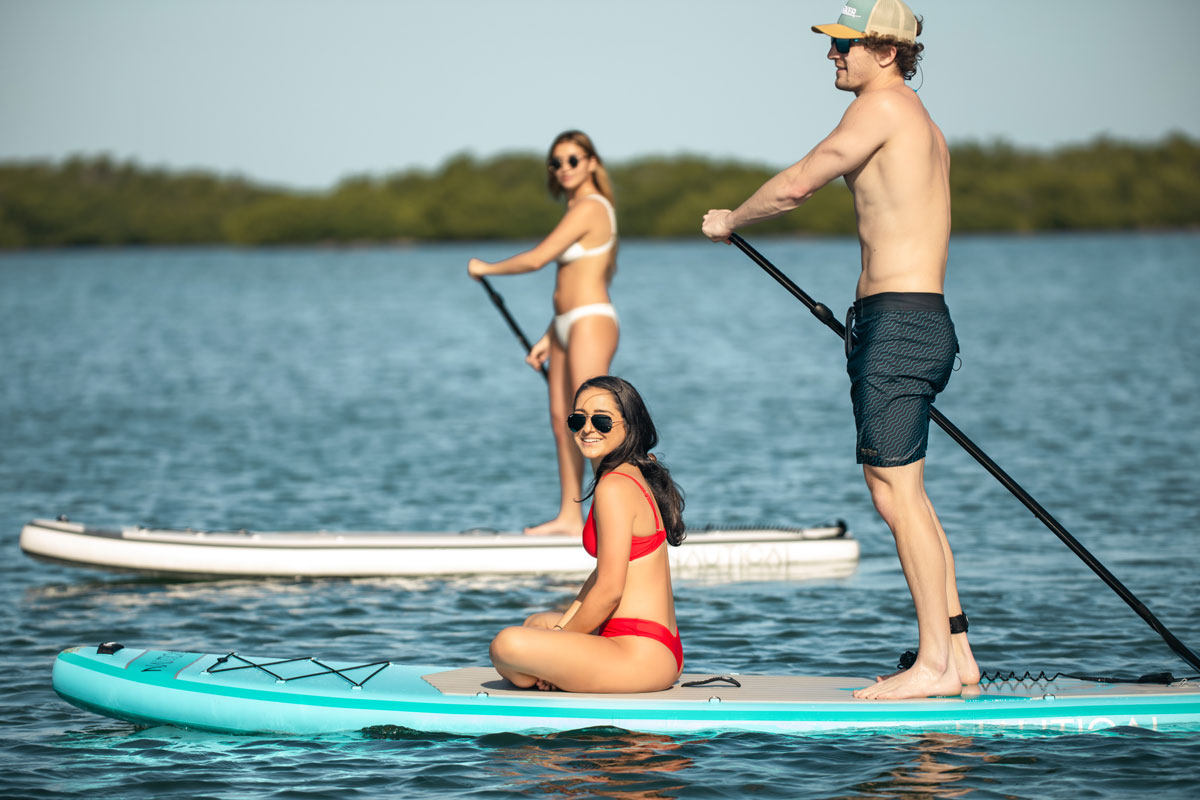 This is one of the areas where sacrifices has to be made — well, at least compared to other iRocker boards. Not that what they have is low quality, it’s just sparse. For starters, there is only 1 storage area compared to 2 on most of their other iSUPS. Still, it’s a 6-point system while almost all other boards on the market only have 4. In addition, there are still a whole host of D-rings (13, if we counted right) for additional attachments, towing, docking and accessories like the kayak conversion kit. Of course, there is also an additional D-ring toward the tail to act as a solid attachment for the included ankle leash.

The EVA pad is a little thinner than in its sister boards but still comfortable enough and grooved to make sure that any water that gets on the deck get’s back home as quickly as possible. A nice touch is how the pad takes up a large portion of the deck for extra passengers. With this weight capacity you probably won’t have a second full-sized adult, but certainly a child or pet…depending on what you feed them.

Surprisingly, you have a choice of 3 colors: white, blue or aqua. We say “surprisingly” because in order to cut down costs on budget boards, manufacturers typically only give 1 stock color option since producing more colors means higher production costs on their end. Once again, a non-budget move from iRocker for this budget board.

The front of the board has a low rocker, which means that it isn’t designed with a high angle. This translates to a board that’s better suited for flat water, the only feature that counts against it for surfing.

As mentioned before, the Nautical has a 3-fin setup. Not only is this one of the only boards under $400 to include this feature, it’s probably the only board in this price range to have all 3 of them be removable! This is an amazing feature that most iSUPs don’t have that makes life a lot easier. By being able to take all 3 off, you can deflate and stack boards with ease and you can remove the center fin if you want to go into shallower waters.

Here is the second area were sacrifices had to be made. iRocker has traditionally made their iUSPS with 4 layers of military grade PVC but this year they have a new construction system that uses 3 but reinforces the board internally. The Nautical only has a 2-layer construction that doesn’t seem to be as strong reinforced as the other boards. While this can all sound bad, the irony is that it has the same level of construction as other iSUPs we’ve seen at twice the price, so it only looks bad in comparison because the other iRocker boards are so well built.

Out of the box you have everything you need to get going. This includes a backpack, dual-action hand pump, fiber glass ultralight adjustable paddle, 3 fins flip lock fins and a Nautical ankle leash with a key pocket. If you’re used to other iRocker boards, you’ll notice that they’re all a step below what are offered with the other models. !

While the paddle is still good quality and not a huge difference from the carbon fiber of the other iSUPs, the pump takes about twice as long to inflate the board as the dual chamber triple-action the other boards have, though still what you expect from just about every other low to mid-range board on the market.

Ironically, this budget board is everything we would expect in a mid-tier board with a couple extras. The biggest negative that this iSUP has going against its sister boards are absolutely incredible and it only looks weak in comparison to them.

If you can afford a couple hundred dollars more and can purchase one of the regular iRocker models, we highly recommend it. But if you’re looking to give this as a gift, need a backup board or are just on a really tight budget, this would make an excellent iSUP. In all honesty, you won’t find anything like this with this price range and even on its own, the 2020 iRocker Nautical still makes an excellent entry-level iSUP.